An immune response to normal cells

An allergy is an overreaction by an immune system which has been thrown off course. Colds have a biological purpose, namely to eliminate a viral infection but not, however, as a reaction to relatively harmless substances such as pollen. Diarrhoea is intended to help the body flush out parasites and not to avoid grain cereals.

There are many autoimmune diseases which affect people in different ways. Two of the most common autoimmune diseases are Hashimoto’s disease and Graves’ disease. In people with these conditions auto-antibodies against thyroid tissues are detected in the blood serum.

Stimulating antibodies can lead to hyperthyroidism (over activity of the thyroid gland). Aggressive antibodies lead to local inflammatory reactions and destroying the thyroid tissue, often ending in hypothyroidism (under activity). Hashimoto’s disease is a condition characterised by hypothyroidism, while Grave’s disease causes a person to suffer from an over active thyroid. In both of these conditions, thyroid hormone production is affected so that the body produces either too much or too little of these thyroid hormones.

Autoimmune disease can also affect the gastrointestinal tract. Immune reactions to intestinal epithelial cells lead to types of inflammatory bowel disease such as celiac disease, Crohn’s disease or ulcerative colitis. While these diseases are each slightly different, they do have some similar symptoms such as causing abdominal pain.

Antibodies that fight against joint tissue are found in types of autoimmune arthritis such as rheumatoid arthritis and Bechterew’s disease. These conditions can cause symptoms such as joint pain and chronic inflammation.

Auto immune conditions can also include neurological disorders such as multiple sclerosis, which affects the central nervous system. The irregular immune system activity leads to healthy cells being targeted by regulatory t cells. The area affected includes cells of the brain and spinal cord. Conditions where immune reactions mean that the body attacks the nerves’ myelin sheath, as seen in multiple sclerosis, occur less frequently. 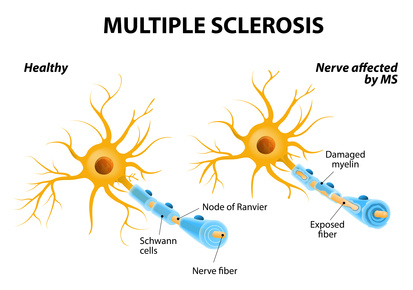 As antibodies are produced against the body’s own DNA, the disease can affect virtually every organ, as is the case with systemic lupus erythematosus. Lupus affects not only the central nervous system, but also the peripheral nervous system. This means that it can impact nerves across any part of a person’s body.

Why do autoimmune diseases occur?

The reason behind the development of auto-immune disorders is still a mystery. It is assumed to be an unfortunate combination of genetic disposition and external factors such as viruses and environmental toxins.

A virus which has penetrated the body coincidently has a very similar surface structure to a thyroid cell, for example. The immune system then produces antibodies to destroy the virus. The thyroid cells are inadvertently destroyed in the process. To some extent, it is thought that autoimmune diseases run in families, or that those with a family history of these diseases are more likely to become sufferers at some point themselves.

How are autoimmune disorders treated?

Conventional medicine does not usually follow a careful therapeutic approach to tackle the root cause of the disease. Treatment is designed to simply relieve symptoms. The exact course of treatment that is used depends on the particular condition that a patient has and what symptoms are troubling them. An under active thyroid, for example, can be treated with hormone replacement therapy and drugs called antiphlogistics can help against enteritis.

In cases where a person has severe symptoms, substances which inhibit the immune system such as cortisol or immunosuppressant are used. The high incidence of side effects from these medications is well known.

BICOM® bioresonance has treated many patients successfully. In one case where 16 treatment sessions were required the patient was left completely symptom-free. A CT scan revealed that the foci detected previously had regressed considerably. The neurologist treating the patient spoke of a possible “spontaneous recovery” or a potential misinterpretation of the previous pictures. It is interesting to note that the term “spontaneous recovery” occurs with surprising frequency during the course of bioresonance therapy.