Severe psychological trauma cannot be directly treated with bioresonance. A difficult childhood, abuse, traumatic events and chronic frustration can cause or encourage illness or impede its treatment. The bioresonance device cannot change mothers-in-law or partners!

While depression is an illness that may often seem hidden, it has a significant impact on population health because of how prevalent it is today. It is categorised as a mental health condition, though it can also bring with it physical symptoms. As well as experiencing several other unpleasant effects, those who suffer from this condition may find themselves feeling little pleasure in things that they would usually enjoy such as good food. Their ability to form and maintain positive relationships with friends and others can also be impacted. As a result, it is vital that affected individuals receive the correct treatment to help improve their quality of life.

The treatment of depression

Conventional treatments for depression include talking therapies to provide emotional support and help a person to process their feelings and emotions. Medicine can also have a central role in the treatment of depression and may be taken temporarily or long term, depending on the doctor’s recommendations.

That said, these treatments often aim to lessen the symptoms that an individual is struggling with, without actually trying to determine why someone has developed depression. In addition, some medications can bring side effects that are difficult to deal with. For some, this may make them question whether or not the side effects are worth the benefits of the treatment.

Bioresonance is one of the different ways that a patient may try to improve their cognitive function. While antidepressant medications may sometimes lead to unpleasant side effects such as anxiety, bioresonance therapy is a non-invasive treatment that can safely be used alongside prescribed treatments. This can be carried out without the risk of serious side effects.

Some practitioners report having success using bioresonance therapy to treat depression; others do not. It depends on what techniques and devices the therapist uses, and their training and experience. The patient also plays a large part.

Even when bioresonance isn’t being used to target depressive symptoms directly, helping to bring someone back to physical health will often see results with cognitive well-being. This is because mental health and physical health are closely related and can have a great impact on each other.

A course of treatment may begin with therapy sessions designed to eliminate harmful substances from the body such as toxins, e-smog, metals and parasites. Detoxification plays a key role. This is because after receiving this treatment, patients are in a better position to benefit from therapy with some programs that aim to directly treat depression.

How do processes in the brain affect mental health?

The limbic system is found in the brain below the cerebral cortex and above the brain stem. The involved structures include areas such as the hippocampus, amygdala and basal ganglia, with the hippocampus forming the posterior part of the limbic lobe, while the amygdala makes up the frontal section. The hippocampus in particular is a component of the limbic system which is responsible for the processing and storage of new memories and information. Researchers have found that prolonged depression can actually cause permanent impairment to this part of the brain.

The structures that make up the limbic system have an important role in controlling an individual’s emotional state. For example, functions of this system include those connected to mood, hunger, pleasure, pain and motivation. Neurons are activated by electromagnetic pulses. This results in neurochemical changes including the release of certain chemicals called neurotransmitters such as serotonin, dopamine, and norepinephrine, which help to enhance mood. 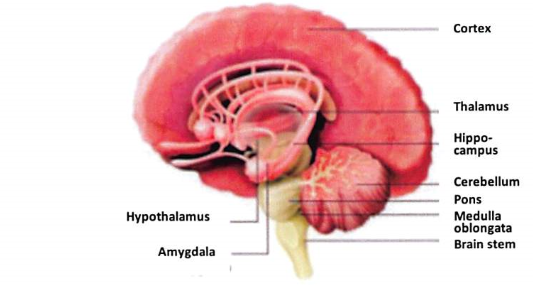 The limbic system of the brain

How does bioresonance therapy work?

Rather than simply managing a person’s symptoms, bioresonance therapy aims to address the root cause of a health problem. This is critical when trying to provide lasting relief for a patient compared with simply suppressing their symptoms for a while.

Bioresonance therapy uses a BICOM® machine to send electromagnetic waves to enhance healthy frequencies in the body. At the same time, the machine works to counteract the effects of harmful pathogenic frequencies and unhealthy cells.

The principles behind using this therapy to target depression are that the electromagnetic therapy works by sending out short, repetitive magnetic pulses that are aimed at the brain’s limbic system. In this way, the area of the brain that is responsible for controlling a person’s mood is being targeted directly.