Rapid and lasting improvement not only with osteoarthritis but also with sports injuries are being achieved in many orthopaedic practices using the BICOM® device for acute sport injuries, such as acute trauma. 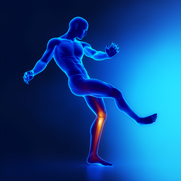 Sports injury such as torn ligaments, a pulled muscle, sprain or strain can be common, even in non contact sports. For a mild injury, simple measures such as resting tired muscles and using an ice pack on the affected area can make a difference. Paracetamol may help to relieve the immediate pain and trying not to bear weight on the injured area can prevent further damage. More serious injuries will require medical attention from a healthcare provider and may involve physical therapy after the initial treatment. At times, orthopaedic surgeons may have to operate to repair torn ligaments or adjust a broken bone.

The BICOM® therapy device has had positive results with torn muscle fibre and severe sprains and strains. However, therapists also use bioresonance as concomitant therapy with broken bones. For example one therapist had an elderly patient with a fractured pelvis whose pain was eased considerably after just two BICOM® treatment sessions.

How successful is the treatment of sports injuries?

Sports injuries generally require between 3 and 5 treatment sessions. BICOM® therapy speeds up the healing process significantly. This means that patients are able to resume their sporting activities sooner, preventing sports injuries from keeping them from physical activity for too long and becoming a heavy blow to their career. In most cases, rapid and long-lasting improvement has been achieved for osteoarthritis by using BICOM® therapy.

“We treated around 20 osteoarthritis patients this year and obtained very good results with all of them. In my experience BICOM® therapy is particularly effective during the active phase of osteoarthritis when the cartilage becomes increasingly degraded and the affected joints are badly swollen and inflamed as a result. It is crucial here that bioresonance relieves the inflammation of the cartilage and halts the degradation process. There are programs for this stored in the BICOM® device. Once I have made a diagnosis, my assistants carry out the treatment. We frequently use the following programs: “acute or chronic tissue process”, “all types of injury” or, where the swelling is severe, also programs such as “lymph activation” or “lymph oedema”.”

An example of a patient who benefited from this treatment is a 70-year-old man who already had advanced osteoarthritis of the knee joint. Following a fall when he twisted this knee joint a severe swelling developed with haemarthrosis (bleeding into the joint). After this fall he would actually have been a case for a prosthetic knee joint, which would require surgery. Yet the pain and also the swelling receded completely within two days of treatment with BICOM® bioresonance. This patient now goes every 6 to 8 months for two or three treatment sessions. In this way he remains free of pain and is pleased to have been spared a prosthesis and the associated surgery.

Manfred Heggli, a naturopath from Switzerland, sent Regumed this report from a 17-year-old patient he had treated.

The patient wrote the following:

Mid January 2005
“I injured my knee while snowboarding. Various examinations revealed that the meniscus was “cracked”. I was given painkillers but I only took one tablet.

A rash developed for the first time the day after taking the tablet: round, raised “pustules” filled with fluid (weals).

The rash itched a lot but was bearable as, at that time, it was minimal (on my arms and legs, especially the knees and elbows). When after several days the rash kept occurring, I went to my GP who prescribed antihistamines. The tablets took effect and I felt better. Diagnosis: acute urticaria, also known as nettle rash.

End of January 2005
It was time to gradually discontinue the medication.

I had barely stopped taking the antihistamines when the whole thing started up again, only worse.

The rash was already spreading over large areas of my skin. It wasn’t always there, but came and went as it pleased. All the deliberating as to whether it could be an allergy ended in nothing – no idea what I could be reacting to.

So back to the GP again. Once again he prescribed the same old antihistamine – however this time, double the dose.

Yet it didn’t work properly so after about ten days I was given a cortisone preparation as well.

That took effect and the rash disappeared completely.

Then it was time to slowly discontinue the medication again – and after a few days the same thing again: itching weals, especially on my arms and legs. Back to the GP who gave me a bigger dose of cortisone which had no effect, not even as I took it.

End of February 2005
The whole thing had been going on six weeks now. The GP said it was very unusual. So probably not acute, but chronic urticaria.

The drugs didn’t help. The GP was baffled so he referred me to a specialist.

First appointment with the allergy specialist. Diagnosis: urticaria. Nothing new. This doctor also prescribed antihistamines – nothing new there either.

This new antihistamine only brought about minimal improvement in the rash, with the emphasis on minimal. When I woke up in the morning, my arms and legs were usually already covered with weals and it was getting worse.

The allergy specialist prescribed new drugs which didn’t help either. Now my whole body was usually covered with a severe itching rash, very unpleasant! If you’ve not experienced it, you can’t imagine what it is like to have all your skin itching and burning too as if you were standing in a fire. You could almost scratch yourself to death. In my sleep I scratched my arms and legs till they bled because the itching was also bad at night.

Suddenly swellings appeared as well as the rash: first only puffy hands and legs, then suddenly also severe swelling in the face and on the lips.

I hadn’t gone into school much since February, firstly because I felt really bad and secondly because I scarcely dared leave the house….

I experienced breathing problems. The longer it went on the worse they became, as if my windpipe was contracting as time went on.

In the evening my top lip suddenly swelled right up and I felt I couldn’t get any air and panicked. My mother called a taxi straight away and I was taken to hospital to A & E. I was given a cortisone injection and other drugs.

Then I was transferred to intensive care where I had to spend a night and a day. The doctors recommended the university hospital’s allergy clinic take a thorough look at everything.

So back home again, the first appointment at the university hospital came round. A nice lady doctor explained a few things and then prescribed a new drug. At the same time I had an appointment with a homoeopath. She said: “You’re not well at all. You look really bad.” But that didn’t get me any further as she said, before she could help me, I’d have to have various allergy tests at the university hospital to find out what I was allergic to. But I couldn’t have the tests as it wasn’t possible for me to discontinue the antihistamines.

It was a vicious circle which I couldn’t escape from.

Up to end of October 2005
It was now over six months since the first weals appeared. I was now a regular visitor at the university hospital, I’d had various tests and had gone through a range of different drugs – and yet I was getting even worse.

The symptoms wouldn’t go away despite strong drugs (which I was taking in high doses).

I couldn’t stop taking the drugs as it was too risky. I’d probably end up back in intensive care.

I often felt dizzy, even lost consciousness. My powers of concentration were non-existent. My overall state of health was bad – no wonder as the strong drugs were obviously attacking my organs and immune system.

At some point I had the feeling I couldn’t go on like this. I tried my luck with a “miracle healer”. He laid his hands on me twice and said now I was cured. Great I thought but unfortunately it wasn’t successful. Despite being off school a lot, I manage with my last ounce of strength to pass my school leaving exam.

November 2005
My vet course which I had been looking forward to for years had begun. But I’d got no strength left to fight. I couldn’t concentrate at all during lectures and was almost in despair about the state I was in. I hadn’t got any strength or energy left to tackle my studies properly. My body couldn’t carry on.

December 2005
An aunt who was a midwife and worked with homeopathy suggested I give BICOM® bioresonance therapy a try. No sooner said than done: my mother looked on the internet for a naturopath who worked with bioresonance: Mr Heggli. She arranged an appointment. At the first appointment I was checked thoroughly and examined. The tests showed that I was mainly allergic to milk, wheat and eggs, as well as to other substances.

From now on a weekly “session” with Mr Heggli using BICOM® bioresonance therapy. At first the “basics” had to be dealt with, detoxication and such like.

Amazingly, after just two bioresonance treatments, I was suddenly much better. I no longer needed the full dose of the strong drugs (antihistamines) every day. It was like a miracle for me if you think that for more than six months I’d had to take high doses of strong drugs every day.

We continued the treatments. After about four or five sessions I only needed the drugs at irregular intervals, perhaps two to four times per week, and always in low doses.

Then Mr Heggli said I should eat a boiled egg as a test and see how I reacted to it. I should say that we hadn’t yet begun egg allergy therapy. Lo and behold: the next day, as Mr Heggli anticipated, I was covered in a rash again – proof that I was allergic to eggs. Good, so the hen’s egg allergy had to be treated. At the same time Candida fungus therapy was carried out with BICOM® and cutting out sugar.

January 2006
I haven’t taken any antihistamines since January 2006 and have no symptoms. My body is now being built up with various homeopathic and plant remedies. It will probably take a little time until my body has completely recovered from the effects of the strong drugs.

After being examined and treated by various doctors and specialists from conventional medicine, hospitals, homeopaths and miracle healers, BICOM® bioresonance therapy is the only thing that has helped me get better!

Mr Heggli has helped me lead a normal life again and I am very grateful to him for this!”
Susanne Heer