Smoking is a major concern all over the world. This legal drug is one of the leading causes of death within the United States and causes almost 100,000 deaths in the United Kingdoms each year. Centers for Disease Control and Prevention estimates that more than 480,000 smokers in the United States are killed by their habit each year. Furthermore, they also estimate that more than 41,000 people are killed by secondhand smoke exposure each year. With 16.8% of the American population being smokers and 19% of people in Great Britain being smokers, figures provide evidence that some sort of action needs to be taken in order to stop the negative effects of smoking on a large amount of people. Action on Smoking and Health reports that 66% of smokers start to smoke before they reach the legal age of smoking, which is 18 in most countries.

Smokers are known to constantly suffer from heart problems, which usually also leads to the development of heart disease. The main reason for this is the direct effect smoking has on a smoker’s blood vessels, as well as on their heart. Smoking damages the body in many ways and can also disturb the normal functionality of the heart’s rhythm.

When these risk factors start to contribute to the overall health of a smoker, several diseases can also start to develop due to these problems. A major risk factor of smoking is coronary heart disease. This is when there is a plague buildup inside the smoker’s coronary arteries, which means a lower amount of oxygen-rich blood is sent to the heart muscle. Atherosclerosis is also common among smokers, which is a condition where plague causes arteries in the body to narrow. All of these conditions can lead to a heart attack or heart failure.

While smoking is a worldwide epidemic, several anti-smoking treatment and therapy options are available. These aim to relieve the smoker of their addiction in order to stop the damage smoking is doing to their body. Due to the fact that tobacco is addictive, anti-smoking treatment options aim to treat the condition as an addiction in order to rid the smoker of their craving for a cigarette.

It is said that within the United States, addiction to nicotine, the drug that creates an addiction in a smoker, is reported to be higher than addiction to any other drug. Centres for Disease Control and Prevention report that almost 70% of smokers want to quit. Action on Smoking and Health reports that 83% of smokers who want to quit found smoking to cause health problems, while 31% also reported that smoking is expensive and wastes their money.

There are several treatment options available to assist smokers looking for a way to quit. While some smokers are able to quit without help, the majority of smokers who want to quit are unable to do so by themselves. These treatment options include: 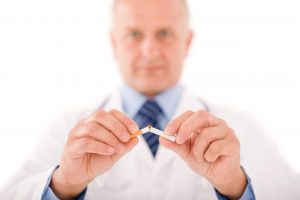 Bioresonance therapy has been used as an effective alternative anti-smoking treatment option for several years. The therapy records the specific oscillations from cells, organs and tissues within the body. This procedure then identifies disturbing electromagnetic patterns that smoking causes in the body. After identifying these patterns, oscillations are changed by the device into a healing therapy form and then sent back into the patient’s body. The result is complete detoxification from all harmful toxins that smoking causes in the body, including nicotine. With this treatment option, nicotine is taken out of the system and cravings for nicotine in the future is alleviated.

Many patients have been able to stop smoking within their first therapy session. A session lasts a total of one hour and it has helped people who have been smokers for several years. In one case, Banyan Retreat was able to provide relief to a man that smoked a total of 3 packets per day. The man was able to give up smoking in one single session. Another case, by the same company, provided relief for a person that smoked 2 packets per day for more than 40 years. This case also required a single session.

Millions of people are polluting their lungs with the harmful toxins and substances found in cigarettes. This leads to the development of heart and artery problems, which often result in life-threatening symptoms. While treatment options such as behavioural therapy and nicotine replacement medication can assist smokers with escaping from their addiction, research finds bioresonance therapy to be one of the most effective treatment options. Several patients have been able to completely quit their smoking habit after a single, one-hour session of this alternative therapy option.