A man with advanced-stage prostate cancer was suffering from severe nausea and vomiting, causing him to not be able to keep any of his food down. A home blood test kit was sent out and this blood sample was used with the BICOM® BodyCheck to identify the areas of stress. Stressors were found in the stomach area including the bacterium helicobacter pylori (HP).

Stress is measured by the BodyCheck on a scale of 1-6, as shown: 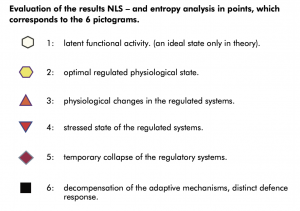 The initial scan shows high levels of stress in the stomach area: 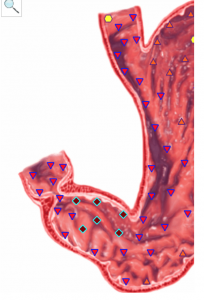 The patient was then treated with a combination of BICOM® bioresonance therapy and dietary adaptations. Foods that had been identified as causing irritation by the BICOM® scan were removed from the diet, while substances that would be beneficial for digestion were incorporated.

A treatment session including basic therapy, unblocking, detoxification and a helicobacter program was run with a BICOM® chip in the output cup. The frequencies were recorded on the chip and this was sent to the patient to be worn just under the navel for 3 weeks. After this time, a phone consultation revealed that the patient had only vomited 3 times in total since treatment began, rather than several times a day, and wanted to continue with therapy.

The second scan shows decreased levels of stress in the stomach:

A further therapy was sent out via another chip and 3 weeks later the patient had not been sick at all and had an improved appetite. 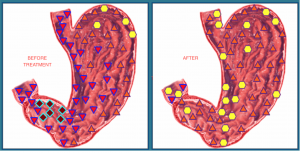 The patient continues to have treatment with BICOM® chips.

Before treatment started, they already had some healthy supplements incorporated into the diet. This included high-quality beneficial bacterial capsules being taken every morning and evening, in addition to a blended formula at lunchtime containing a combination of both friendly bacteria and enzymes. They also had tablets with betaine hydrochloride and pepsin. Sauerkraut and coconut kefir were used, with organic cold-pressed coconut oil acting as a cooking oil and spread substitute.

The patient’s son put together a dietary program based on his own knowledge and research that he carried out into the HP bacterium. This program had three main aims:

This was carried out to complement the ongoing treatment with the BICOM®, which was helping to strengthen weaknesses and invert pathogenic frequencies.

The patient and his son had been growing organic vegetables, namely, broccoli, cabbage and radishes; they had also grown their own alfalfa sprouts and lentils, both of which belong to the legume family. All of these foods are full of nutrients and enzymes, as well as being easy to digest, making them very beneficial to incorporate into the patient’s diet.

Broccoli, in particular, is immensely high in a compound called Sulforaphane; this substance has been shown to have both anti-cancer properties and to have great efficacy in fighting HP infection. For example, in one scientific study, sulforaphane completely eradicated h pylori in 8 out of 11 grafts.

They also made linseed tea, which had a rather viscous consistency. The patient took 2×2 drops of concentrated oil of oregano, as well as consuming capsules containing olive leaf extract and Para-free Plus capsules which contain a mixture of different parasite-fighting herbs.

The son also put together a liquid concoction of substances which are known to be beneficial to health:

Before each meal, the man was also taking a supplement called Restore that is added to water and contains a mixture of several different minerals; this helps to strengthen the gut wall, preventing toxins from entering the body. He was also taking magnesium oxide powder but then switched to a product called OxyTech capsules, which are an oxygen-rich vitamin and mineral supplement, designed to aid in clearing debris from the colon.

The patient experienced significantly improved symptoms and decreased levels of stress after treatment. This case study provides an example of how the BICOM® BodyCheck can accurately identify areas of stress in the body. This information can then be used to create an effective treatment plan using bioresonance therapy, alongside appropriate dietary adjustments.