Institute of Experimental Pathology, Oncology, and Radiobiology of the National Academy of Science of the Ukraine

The investigation was carried out over seven months using C57BI mice which were held for 6 months in the ambient conditions of the radiation zone of the Chernobyl accident. Total dose of external garrima-noise during the whole period of time in Chernobyl zone was less then 0.1 Gy. In these experimental animals, damage of immune homeostasis and formation of secondary immunodeficiency was observed.

To correct the immune system status, the endogenous modified electromagnetic fields of the radiated Chernobyl mice was applied. The treatment led to normalization of thymus and peripheral lymph nodes weight and cell numbers indices as well as the peripheral lymph nodes’ cellular composition. The resistance of the animals to an experimentally induced vital infection returned to the level of the control animals of the same strain.

The study of the influence of continuous row-intensity irradiation (the so called Chernobyl factor) on the immune system reveals a wide variety of immunomodifying effects of this type of irradiation. Quantitative (the number of ‘Adis and cellular composition of central and peripheral organs of the immunity system and the blood) [1-4] and Tialitative (functio-nal activity of various inimunocompetent cell populations and the rate of cooperative immune reactions) [2,51 indices of the immune system are changed substantially. Regulative interactions (the level of some cytokines, a- and g-interferon, 1L-2, TNF, and antigen-specific T-suppression) were altered [6-81 Proliferation and activation of processes stimulation of some other indices [4,6,7] is possible in an early stage of radiation damage when the nonspecific adaptive reactions dominate alterations in the immune system [31].

The immune system homeostasis disturbances develop with the time of irradiation to form a secondary immune deficiency. This is revealed in experimental [2,5,7] and wild [9] rodents and cattle [101 in the radiation zone created after the meltdown at the Chernobyl nuclear power plant. The preferential disturbance of the activity of natural killer cells and T-Iymphocyte-dependent reactions is a peculiarity of such immune deficiencies [2,3,5,7,81, The obtained results show that in a post-Chernobyl situation, the correction of the immune imbalance by using conventional immunostimulatots may be not only unexpedient but also harmful.

The correction should be mostly aimed at the enhancement of the immune system adaptability, rehabilitation of the normal maturation and differentiation of the lymphocytes and optimization of the immune cell interactions [11,12]. New methods of immune correction are offered to counter the effects of the continuous low-intensity radiation [11,14 A new helpful method in the correction of immunodeficiency could be Bioresonance therapy.

Nine months old male mice of line C5713I, are under investigation_ At the age of 2_5 months mice were conveyed from the vivarium of the R. E Kavetsky Institute of Experimental Pathology, Oncology, and Radiobiology of the Nail Acad. Sci. of Ukraine to the institute’s experimental base, situated in the town of Chernobyl. Hence, they were maintained under conditions of low-dose ionizing radiation for 6.5 months. The animals were influenced by both background y -irradiation and the action of radionucleids being administered, generally with water and food. The animal’s diet was comprised of the food-stuffs produced in the contaminated zone. The spectral content of radionucleids, its activity, distribution within various organs and tissues were precisely described previously [14i. Total dose of external y -noise was less then 0 I Gray (Gy) during the whole period of time in the Chernobyl zone. The activity of radionucleides in food stuff was in rate of 224 Becquerel (E3q) per day The contribution of y-component in total dose of radiation was not counted.

The BICOM device (Bragemarm, Germany) was used to acquire the ELF-ELI-EMF of the untreated Chernobyl animals (group 1, as denoted below), modify such EMF and transduce this field into the rake of-the remaining. experimental groups. The device is equipped with 10Hz – 150kHz frequency band-pass filter, The device also makes it possible to process with a more narrow frequency band or a fixed frequency. The device can amplify 0.05-64 times the received ELF-ELI-EMF. Moreover, a special separator makes it possible to filter out harmonious oscillations (H) from disharmonious (D) within the total spectrum of oscillations (A). The mice’s electromagnetic oscillations can be inverted (the “Ai- function), then transmitted to the treated mice as a mirror image, phase-shifted through 1800. The same can be done with the separated (D) part of oscillations (the “Di” function) [13]. On the surface of “output” applicators the power density was less than 1mW/m2.

Let the group consisting of “Kiev control” mice be group 0.

Group 1: Mice from Chernobyl that did not interact with Bioresonance Treatment (BRT).

Group 2: Animals continuously treated by BRT programs using the electromagnetic fields of radiated Chernobyl mice after they were transported to Kiev:

To avoid a misunderstanding of ‘nn speeds of bandpass”, in this case accepted EMF: comes up and dawn through bandpass consequently folloving from frequency with constant chosen speed BRT is administered once a day, five times on every Second day in the morning (II a.m.) to mice in experimental groups 2 and 3.

The immunological assays were conducted I week after the last BRT. Organ indices (the weight of thymus, spleen, and peripheral lymph nodes as well as mean number of lymphocytes in those organs) are estimated by a commonly used method (1).

Delay Type Hypersensitivity Reaction (DTI-1R) is tested by the routine method [161 in modification [5]. The natural citotoxity or functional activity of NK cells is checked radiologically and derived from the destruction of the K562 target-cells labeled with 14C-hydrolyzed protein [51 For the purpose of estimating the resistance to a viral infection (B-immunity), the animals are infected intrinsically with an allantois culture of the A/PR8/34 influenza virus at a 100 E1D dosage. The dynamic of mortality is determined until the 21st day after infection [17]. At the same time, all changes in morphology and weight parameters of the lung of the survived mice are measured under the microscope [5]_ Antigen-antibody reactivity (serum antihaemagglutinin titres) was examined using the standard method of haemagglutination reaction.

Indices in the thymus and lymph nodes for group 1 mice (untreated, Chernobyl mice) differ much from that of the Kiev control group (Tab The indices for Macronucleus T-lymphocytes, and Blasts and large lymphocytes in group I mice differ greatly from the Kiev control group (Tab_ 2). The same can be said regarding the rate of functional activity of NK cells, mass of lungs and antibody production against flu viruses (Tab. 3, 4). Thus the antiviral resistance of group 1 mice was decreased considerably though the dose of infection was 0.01 1_,Dio of the dose administered for mice of the Kiev control group, nevertheless the mortality of the group I animals was 20% (2 mice in 10). The results show the physiological condition and immunological status of group 1 mice was much deteriorated.

In lung tissue, the large foci of haemorragic pneumonia was observed three weeks after infection. The weight of the lung on average was 15+/-3.0 mg/g, the weight increase index was

94 In contrast, among the control animals Kiev (group 0), no deaths resulting from infection were observed. No macroscopic changes in the morphology of the lung tissue were found

The treatment mode for group 2 animals resulted in the rehabilitation of the immune system; the weight of the thymus and peripheral lymph nodes returned to a normal level. Normalization of the lymph-node’s cellular composition, regarding the component of mature T’-cell, was found (Tab. I, 2). As compared with group I, B-lymphocytes content was practically unchanged. The relative weight and mean number of lymphocytes in spleen are the highest in the group 2 (Tab. I). The indicators of effected activity of different immunocompetent cell’s populations are altered: NK cell’s activity remained at the level of untreated mice. Application of treatment programs caused an increase of the resistance of organisms to the infection: 100% of the treated mice survived. Microscopic alterations appeared on the 21st clay after infecting like a single small foci of pneumonia (1-2 foci per mouse). The relative weight of lung was 9.7 +/- 0.8 mglg (P1-2=0.1;P2-4=0.1) The weight increase index was 1.18.

The increase of the organ indices took place after the treatment of animals with programs for group 3. In comparison with group 2, the effects of treatment are more pronounced in thymus and less in spleen and lymph-node (Tab. 1.). Lymph-node cellular composition is also significantly distinguished and exhibits the lowest content of the mature T-cells, while the content of blasts and large lymphocytes was increased as well as the number of Bells (Tab. 2.). The rate of the NK­cells activity was remarkably lower than in other groups. The mortality in the acute period of inflammation was 20%, as in the case of the untreated Chernobyl mice. The relative weight of the Lung by the 21st day after infection was 15.2 ± 2.9 mg/m, the weight increase index was 1.85.

The 6.5 mouth placement of the male mice line C57B1 in the radiological conditions of the Chernobyl zone caused alterations in a variety of immunological determinants. Spectrum, peculiarities and nature of the alterations are consistent with those revealed previously in the mice of other lines and in rats kept under analogous conditions (1-3.5). The status of immune system of animals may be defined as immunodeficiency (2,51). Regardless of the program, essential alterations in a variety of immunological indices strictly connected to the current state of the immune system were observed. But only by applying the programs selected for group 2, immunocorrecting effects manifested themselves integrally in the in. crease of the antiviral resistance of animals

One of die character’s-tics of that depression is redistribution in the ratio of mature and immature irnmwlocompertent cells towards a prevalence of tlie munaturc cell population [1,3]. The scheme of treatment in group 2 appeared to cause a predominant optimization of T-cell differentiation and maturation. This may explain the intensified migration of cells towards peripheral immune organs and the subsequent increase of the cell number in spleen and lymph-nodes. The ratio of mature/immature cells in effector populations was optimized and the efficacy of cooperative immune reactions (antibody’s production) grows. Since spontaneous antigen-un-specific separation is known to decrease after prolonged habitation under radiation conditions this does not contradict the proposed mechanism of BRT. As this takes place, the damage in activity of suppresser-cells is observed at the level of mature T-suppressers (5) The increase of antigen-un-specific suppression may well cause a decrease in the level of irnmunologiocal reaction when using program 2, and improvement of differentiation and Tell maturation involves the suppresser subpopulation as well. However, this aspect of the program requires special examination.

The following part of the discussion covers the immunological effects of ELF-ELI EMF that are observed in group 3 mice. The program appears to stimulate the proliferation of lymphoid cells but not differentiation or maturation. This is suggested by the increase in the cell number, primarily of thymus and by significant gains in blasts (but not immature T-cells) contained in peripheral lymph-nodes. The unbalance of functions of mature and immature lymphoid cells of different populations being kept (or increased) may cause a significant decrease in the natural cytotoxity and the lack of pronounced defects in program 3 concerning resistance to viral infection.

Finally, several explicit conclusions are drawn: Endogenous ELF-ELI EMF can influence the functioning of the immune system and correct a condition of immunodeficiency created by exposure to continuous, low-intensity radiation. Indirectly, shown is that intervals of frequencies around 8701iz posses physiological oscillations. A clarification of these results would require a more sophisticated theoretical as well as practical approach. 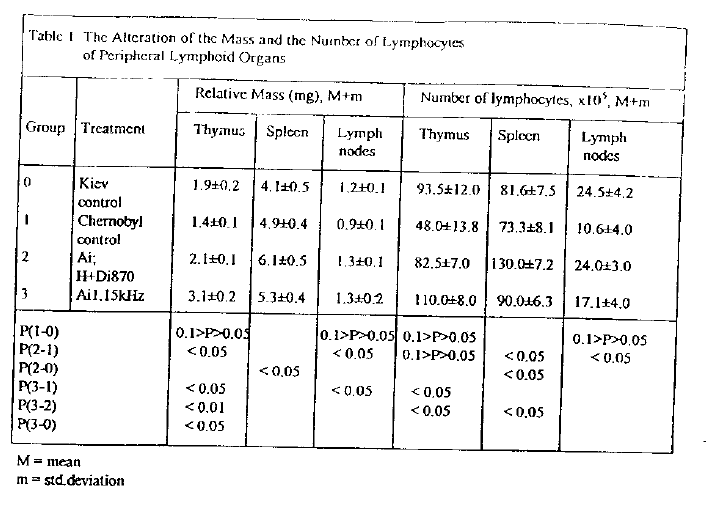 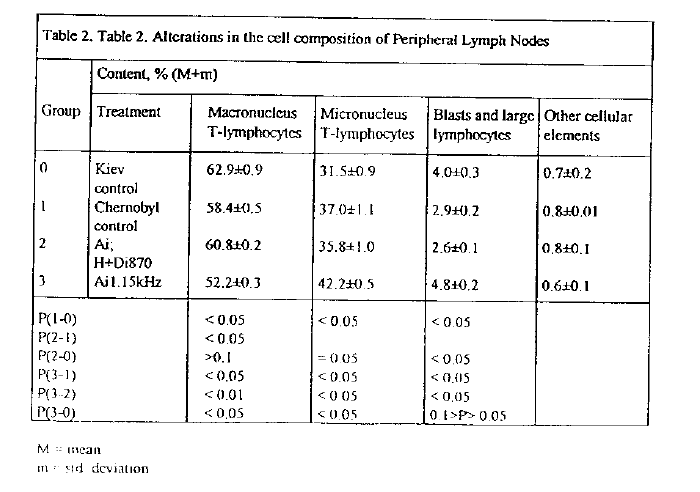 Doctor, author and fitness enthusiast, Ahmed Zayed, MD, is a surgery resident with a passion for helping people live a happy healthy life. Dr. Ahmed Zayed holds a baccalaureate of Medicine and Surgery. He has completed his degree at the University of Alexandria, Egypt. Dr. Ahmed believes in providing clear information to readers. Other than his passion for writing, Dr. Ahmed spends his time outside the hospital, either reading or at the gym.