Unfortunately motherhood is not always without its problems. I thought that breastfeeding would be the most natural thing in the world. But shortly after the birth of our little daughter Lena I found out otherwise. From the very start Lena was an enthusiastic and quick drinker and if the milk did not come out straight away she would bite hard with her little gums.

I clenched my teeth until I was only able to offer my daughter my breast with tears in my eyes. The midwife told me that it would be better after a few days of becoming accustomed to it. But because of all the sucking and biting, my nipples were extremely inflamed by this point and began to suppurate, causing my milk to stop. What happened then was a total crisis for me.

My milk would not flow, everything was inflamed and my breasts were getting harder all the time. I was unable to raise my arms anymore because the tension and pain in my chest was so great. My midwife tried with all the options available to her to ease my pain: homeopathy, quark poultice etc. … Nothing helped. In the meantime I had also developed a temperature of 40 degrees for the past two days and could not get it down. I had to express the milk, because my milk was being infected with bacteria as a result of my suppurating nipples. In the interim Lena was being given goat’s milk in a bottle. What a great start to motherhood! After three days my midwife had no more advice to offer and sent me to a gynaecologist. He was really shocked and advised me to stop breastfeeding straightaway and on the same evening to start taking a high dosage of antibiotics. He warned of the risk of an abscess on the breast which, if it developed, would have to be removed surgically.

But stopping breastfeeding was the last thing I wanted to do, even though I was worried about a potential abscess. Instead of going to a pharmacy to get antibiotics, I went to a naturopath who was experienced in the area of bioresonance therapy. She was sorry that I had not come earlier, but was prepared to treat me with bioresonance. She did stress, however, that I would have to take the antibiotics if there was no immediate improvement in my condition. I also had to promise her to inform her about progress with my condition at regular intervals.

The naturopath treated me with the BICOM® program for mastitis. I was then treated with another lymph program.

I could now raise my arm without any pain in my chest. The next day my nipples were
no longer suppurating and my temperature fell. My midwife could scarcely believe it
when she visited me the following day. On the following two days the naturopath
treated me with the same programs. During the treatment the blocked milk started to
flow again, my breast became softer again and the cracks in my nipples visibly
healed. To achieve such success with just three BICOM® programs was unbelievable.
I threw the prescription for antibiotics in the wastepaper bin and 1 week later I was
able to breastfeed Lena again for the first time. That was 4 months ago and when I
look at my small daughter breastfeeding and how much she enjoys drinking and
sucking, I am delighted that thanks to BICOM® therapy I didn’t have to stop
breastfeeding.
I truly hope that gynaecologists and midwives have the opportunity to learn about and
use bioresonance therapy, in order to help mothers and their babies in a gentle and
simple way. 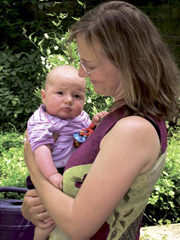