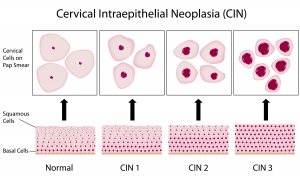 In January 2002 I went for a check-up with my gynaecologist. The usual smear tests were carried out and this revealed a PAP III value. The lab report made the following remarks: metaplasia, signs of a viral infection and moderate epithelial dysplasia bordering on acute dysplasia, but with no carcinoma in situ.

Of course, I was extremely concerned with these findings. The doctor stressed that the tests would need to be repeated at regular intervals in order to keep a check on how it progressed. He did not want to start any treatment.

In April 2002 I had a further smear and this was sent to a different laboratory. This test also revealed the same findings as in January. At least the values had not got any worse. From test to test I hoped for an improvement in the value. But this was all in vain and on the contrary, the test in August 2004 revealed a PAP IV a value and the assessment was: acute dysplasia of the portio mucous membrane.

My gynaecologist recommended the surgery in the form of a biopsy of the cervix, known as cervical conization. Now I was really worried. An operation on my uterus? At my age? I was only 25 years old after all, and wanted to have a family. The gynaecologist I was assigned to stressed that the operation to stop cancer from developing could not be avoided. This unsettled me greatly. Although the doctor reassured me that it was a harmless procedure and that I would still be able to have children, I was worried about having an operation at all. Particularly because I had heard that if there were cancerous cells present an operation could lead to the cancerous cells being spread.

In my distress, I turned to an experienced bioresonance therapist. I was tested using the BICOM® device and various test sets. The therapist told me that she was prepared to treat me, but stressed that there was a time limit on the procedure and with the proviso that in November I would have to have another PAP swab taken. If this test revealed an improvement she would continue with treatment. If this was not the case I wouldn’t be able to avoid having an operation. I decided to go down this route.

First of all I received BICOM® treatments at weekly intervals and later the time between treatments was increased to two or sometimes even three weeks. At the start of December 2004 the PAP test showed IIw. The gynaecologist explained to me that this indicated that only slight changes were present and the test result was almost normal. I was incredibly relieved. I continued to receive further BICOM® treatments and the test on 14 April 2005 revealed a clear PAP II value.

I cannot find the words to describe the feeling of relief. It was as if the sword of Damocles had been hanging over my head for the past few months and had now disappeared. What a feeling of happiness and gratitude!

I had never really given a lot of thought to my health or medicine. I had also never thought that I would be faced with the question: conventional medicine or alternative medicine? I can say today with total confidence that it is a blessing that bioresonance therapy exists.

Editor’s note: In response to an enquiry by Regumed the patient reported in September 2010 that she has been having regular check-ups every 6 months for the past few years and the laboratory still confirms she has a PAP II value.