Retrospective study based on 200 cases from medical practice

His success with the BICOM device led Dr. Peter Schumacher, a paediatrician from Innsbruck, to conduct a study of 200 cases of severe allergy and neurodermatitis in order to record the outstanding results achieved.

The study was based not on a carefully selected group but on a random patient population within a 6 month period, irrespective of age, diagnosis and severity of the condition.

An established diagnosis of allergy was a condition of inclusion in the study. Diagnosis was considered established not just if one or more tests yielded a positive result but also if there was a definite proven connection between the allergen and the allergy symptoms. Hay fever was excluded from the study due to the peculiar characteristics of that condition. The patients and their families were interviewed 6 months after the completion of therapy. 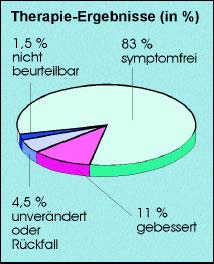 4.5 % The allergy remained unchanged. No therapeutic success could be identified or, after initial improvement, the same allergy recurred. However abstinence failures during therapy were detected in all members of this group.

1.5 % could not be evaluated since there had been no new contact with the allergen in the intervening period.

To highlight some particularly difficult cases: Of the 62 neurodermatitis cases recorded, 44 were symptom-free following BICOM treatment and 16 were improved and, of the 33 asthma cases, 29 were symptom-free and 4 improved.

The study was conducted by Dr. Peter Schumacher, Innsbruck.

These experiments rest on the widely known fact that the hormone thyroxine plays an important part in the metamorphosis of amphibians. The transition from fish-like tadpole to land-based, four-legged frog is generally set in motion and maintained by this hormone which is synthesised in the thyroid gland and contains iodine. However, if thyroxin is offered in aquarium water in a high molecular concentration (e.g. log 6 parts by weight or above), then metamorphosis slows down or development may even stop completely.
It was possible to prove through two double blind studies carried out independently of one another in Austria and Italy that electromagnetic bioinformation can be picked up and transferred by a bioresonance device (BICOM). 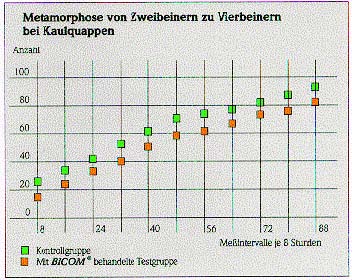 By transferring electromagnetic information from a toxically concentrated solution of the hormone thyroxine to aquarium water, it was possible to slow down metamorphosis of tadpoles significantly in numerous parallel experiments.

For this study, information was recorded between 1991 and 1993 on 200 patients who had responded poorly or hardly at all to conventional measures. Most of the patients were adults with allergic skin diseases, pruritus, allergic conjunctivitis, allergic intestinal disease, allergic respiratory tract disease and pollen allergy. Allergy therapy was conducted with the aid of the BICOM device. Additional programs such as elimination of scar interference, mycosis therapy, detoxication, etc. were included as necessary. 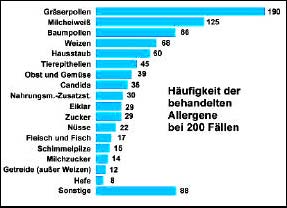 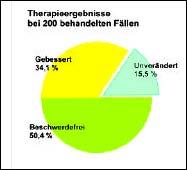 Unsatisfactory therapeutic results and failures may be caused by the following:
In the case of powerful allergens, treatment must be administered several times if necessary.
If this is still unsuccessful, then a different therapy option should be tried or therapy blocks checked for.

Reactions to the allergen disappear initially, only to reappear later. This generally means there is a therapy block.
Persistent or recurrent symptoms are caused by a different allergen or other factors.

The study was conducted by Dr. med. Jürgen Hennecke, Aachen.

The study examined 28 patients with chronic hepatocellular damage whose condition had been known about for at least a year but had not been treated with drugs and whose laboratory values (GOT, GPT and gamma-GT) were slightly raised. 14 patients were assigned to the treatment group and 14 to the control group. Both groups had the same enzymatous values when treatment started.

The therapeutic effect was determined from the GOT, GPT and gamma-GT values. On completion of the study the values of the group treated with BICOM were within the limits of normal while the values of the control group were still within the pathological range. The following table shows the percentage decrease in the values:

It is clear from the experimental evidence presented that treating minor hepatocellular damage with BICOM therapy in the frequency range between 10 Hz and 150 kHz can bring about reconstitution of damaged hepatic cells.

Therefore the results of this study definitely prove the effectiveness of BICOM Resonance Therapy.

The study was conducted by R. Machowinski, randomisation and code list by the Naturopathy Outpatients Clinic of the Carstens Foundation of the University of Heidelberg under the direction of Prof. Dr. med. I. Gerhard.

Two groups each of 12 high-performance sportsmen (footballers, athletes, runners, hurdlers) suffering from overstrain syndrome were treated. One group was treated using conventional methods such as ultrasound, stimulation current, etc. and the second group exclusively with BICOM Resonance Therapy. The success of treatment was assessed according to therapy time and pain was rated on a visual analogue scale (VAS) with accompanying clinical status. Both groups were recommended to give up training for a time to help relieve their condition.

This meant that the time spent away from training was considerably reduced – an extremely important factor for high-performance athletes! All BICOM treatment was straightforward, had no side effects and could be concluded successfully.

The study was conducted by Dr. med. B. Jesensek Papez and Dr. med. prim. J. Barovic at the Maribor teaching hospital, Slovenia.

In an extensive NBT test series it was possible to demonstrate an objective change in phagocyte activity of human polymorphonuclear leucocytes in donor blood through endogenous ultraweak electromagnetic fields (EMF) using BICOM Therapy.
This test series was conducted with several hundred individual settings on around 50,000 individual samples with reproducible results. It could be shown that

The study was conducted by Osadchaya and D. Sakharov: R.E. Kavetzky Institute for Experimental Pathology, Oncology and Radiobiology of the State Academy of Sciences of the Ukraine in Kiev.

By integrating the amide I bands in the infrared spectra of the HSA preparations of healthy subjects and of cancer patients, the percentage share of structural domains occupied by -helix, beta-pleated sheets and random coils was established.

This test series demonstrated the following:

The test results described can only be interpreted based on the following assumptions:

These fields can be detected by the BICOM device, processed and transferred to biological systems.

By transferring these same fields to biological systems, it is possible to induce significant modifications at a molecular level in the sense of a resonance interaction through the information content of endogenous electromagnetic fields.

The study was conducted by O. V. Zhalko-Totarenko and V. V. Livetsov: LEKON research centre at the State Academy of Sciences of the Ukraine in Kiev.

The influence of BICOM Resonance Therapy on the immunological system of mice contaminated with radioactivity was examined. The results obtained lead to the conclusion that applying endogenous low energy, low frequency electromagnetic waves (ELF-ELI-EMF) in the range studied around 870 Hz can correct secondary immunodeficiency resulting from long-term radioactive exposure to Chernobyl-type radiation.

BICOM resonance treatment brought about normalisation of thymus and lymph node growth in the test groups. Enlargements observed in the spleen point to increased spleen activation which can be explained by increased break-down of damaged blood cells, cell fragments and immunity complexes.

Doctor, author and fitness enthusiast, Ahmed Zayed, MD, is a surgery resident with a passion for helping people live a happy healthy life. Dr. Ahmed Zayed holds a baccalaureate of Medicine and Surgery. He has completed his degree at the University of Alexandria, Egypt. Dr. Ahmed believes in providing clear information to readers. Other than his passion for writing, Dr. Ahmed spends his time outside the hospital, either reading or at the gym.